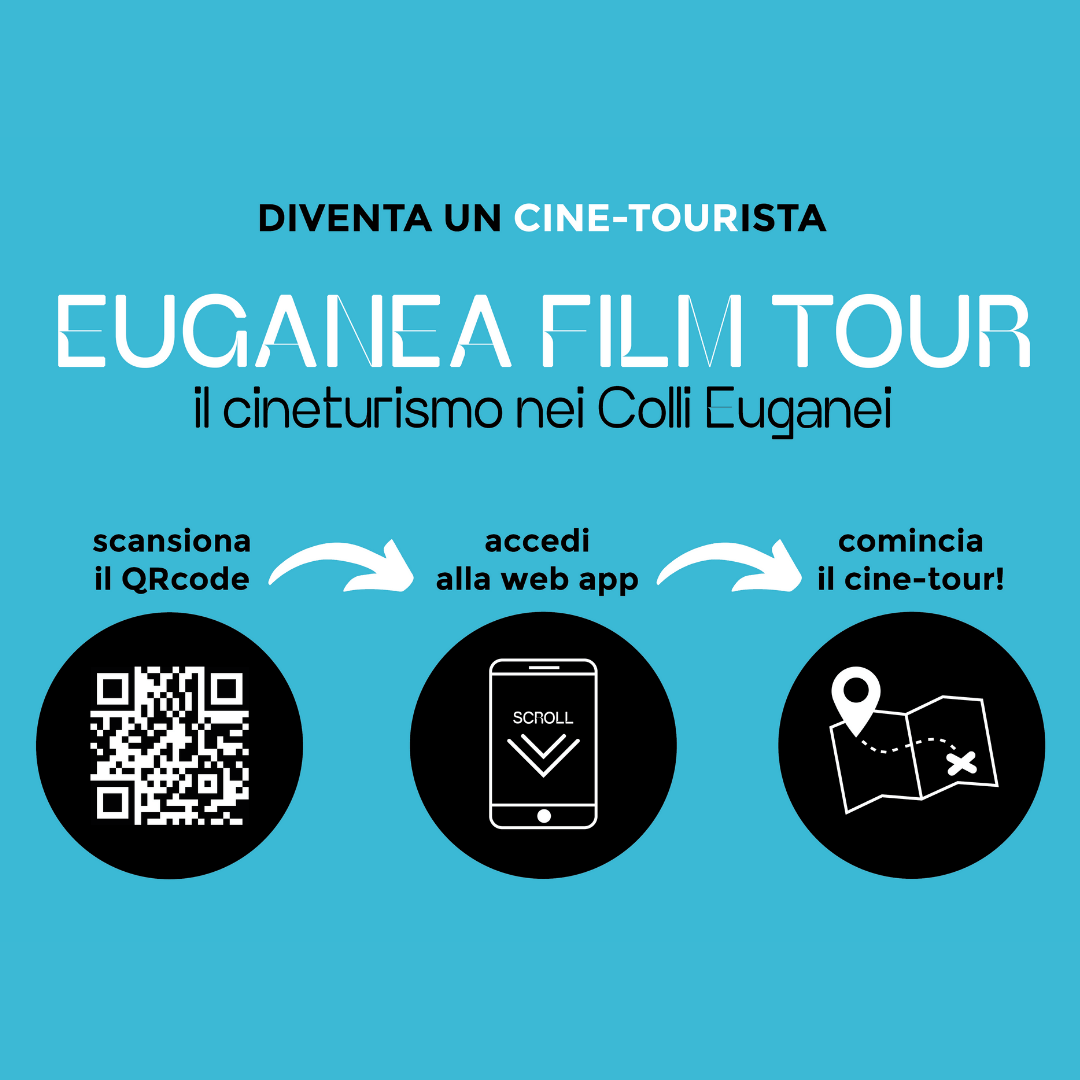 Film tourism in Monselice and in the Euganean Hills

Euganea Film Tour is the development of a process that has involved the Veneto Region, the OGD Terme e Colli, the University of Padua, ETIFOR, the Municipality of Monselice and organizations in the Euganean area with the aim of creating new products and tourist experiences in Padua and the Euganean Hills, developing some thematic strands such as film tourism.
Euganea Film Tour is the result of the Cult-CreaTE project, financed by the Interregional Cooperation Programme Interreg Europe 2014-2020, which aims at strengthening the synergy between the tourism system and the cultural-creative enterprises in Veneto and in the other regions involved, and is organised by Euganea Movie Movement under the patronage of Veneto Film Commission.

Cinnetourism is a particular type of tourism stimulated and induced by the vision of places that the cinema stages. It is a phenomenon that has existed for a number of years, but if it was previously limited to film lovers, it now seems to have new dimensions and characteristics. People travel to learn and experience the everyday life of the places they visit, they look for unique and immersive activities to be enjoyed in a sustainable and responsible way and it is in this perspective that cine-tourism finds its place.
Film tourism is a key segment in the promotion of the territory and what it has to offer; it could become a strategic sector of the economy also in the Veneto region (where more than three thousand films have been shot) and enable the integration of other tourist products, such as food and wine, cycling and river tourism, which are strategic for our territory.

Not only important films (The Merchant of Venice, 2004; Sole a catinelle, 2013) but also successful TV series have been shot in the Euganean Hills. Italian productions such as RAI and Fandango (L’alligatore, 2020) and international ones (Atalantique Productions, Canal +, Eos Enterteinment and SKY distribution for I Borgia, 2011) have chosen the Hills as the main location for filming.

The result of the project is the creation of four film-tourist routes through the natural and artistic beauties of the Euganean Hills Regional Park. The development of the project starts from Monselice, which will become the “film-tourist capital” of the Euganean Hills, using the Villa Pisani as a reference point for tourist information, as a starting point for the film-tourist routes and as a space dedicated to the films and TV series shot in our territory.

The work of mapping and collecting data on cinema was carried out in collaboration with Giulia Lavarone and Farah Polato, professors at the University of Padua, and the researcher Laura Cesaro, who are engaged in the study of the relationship between cinema and tourism. This was followed by the creation of itineraries of different lengths and difficulties, to be covered by bicycle or car.
The itineraries are available on the euganeafilmtour.it web app, an agile tool suitable for the use of the project’s contents. Within the web app there is an interactive map to show the stages of the tour and a series of in-depth film reports on the films that have been shot in the Euganean Hills are available to everyone, with images and videos of the scenes and locations used for filming. For each film and TV series there are trailers, synopses, technical data and an in-depth section called “relationship with the territory” that contextualises the film with the tourist locations in the Hills.

The points of interest highlighted in the routes therefore contain a mix of tourist/cinematic information and media materials (trailers, backstage, frames and more) to enrich the user experience.

Dino Risi, Alberto Lattuada, Salvatore Samperi, Elio Petri are just some of the authors who have recognised the Euganean Hills Park as an evocative location. This route, entirely dedicated to auteur cinema, offers the opportunity to visit two types of landscape: the first among the hills, where assets of historical and cultural interest are immersed in the wilderness; the second in the flat area of the spa, at the foot of the Hills. The itinerary is accessible from a number of points, including the towns of Abano, Montegrotto and Battaglia Terme, particularly for those who intend to reach the area by train or car. It is advisable to plan the route in advance so as to be able to visit the historical and cultural heritage of these fascinating areas, taking into account the opening hours.
Distance 29km
Difficulty Low

In the rich panorama of cultural sites in the Euganean Hills Regional Park, magnificent residences, Venetian villas and monumental complexes, often located near watercourses, are the main attractions: pleasant and evocative places. Villa Barbarigo and the eighteenth-century gardens of Valsanzibio, Villa Selvatico-Sartori and the Castello del Catajo are just some of the suggestive stops you can visit along the way, discovering the films and television series that have found their locations in these places. To enjoy the experience to the fullest, we recommend you follow the route clockwise: it will be easier to travel the stretch between the medieval village of Arquà Petrarca and Galzignano Terme. This first section of the route, which is entirely tarmac, provides a junction that allows two different options: continuing from Bresseo di Teolo towards Selvazzano Dentro, a short diversions allows you to admire Villa Emo Capodilista, known as “La Montecchia”; otherwise the route proceeds towards the monumental complex of the Praglia Abbey to rejoin the dirt track along the right bank of the Canale Battaglia that will take you back towards Monselice.
Distance 55km
Difficulty Low

Completely immersed in the Euganean Hills, the proposed itinerary allows the more experienced cyclist to visit the heart of the Regional Park through the most famous places of Carlo Mazzacurati’s films. Arriving near the monumental complex of Valsanzibio, which offers a large, freely accessible car park, the route leads to the Calto Callegaro path that runs along the watercourse from which it takes its name. At the crossroads with Via Scalette, near Arquà Petrarca, it is possible to choose whether to continue and face the climb towards the village of Faedo: you can visit the landscape that protected the two escaping protagonists of La lingua del santo (2000), retracing the iconic uphill stretch of Via Roverello that Willy and Antonio explored disguised as cyclists. The descent leads to the vantage point of the Mottolone plateau, a natural viewpoint over the hills. The route ends with a return towards Galzignano amidst evocative expanses of olive groves and vineyards. There are few water fountains along the itinerary, so it is advisable to start equipped. The use of a mountain bike is recommended due to the steep road and some steep sections.
Distance 20km
Difficulty Medium-high

This cycle path, which offers those who travel along it the chance to immerse themselves in a splendid landscape among enchanting historic villages and the green heights of the Euganean Hills Regional Park, is entirely dedicated to the figure of Carlo Mazzacurati, Padua’s most important film director. From the thermal spring in which the protagonist of Notte italiana, his first feature film, plunges, to the Laghetto della Costa in which the two companions of La lingua del Santo throw the Beetle, to Monselice, the town where many scenes of his last film, La sedia della felicità, were filmed: along the route the main locations chosen by the director dot the territory, alternating with sites of cultural interest. It is possible to complete the route in a single day in the saddle, in peace and quiet and far from the crowded chaotic cities, but also to plan stops to savour the charm of the ancient city of Este or the medieval village of Arquà Petrarca. Along the route you will find some equipped areas for resting, as well as refreshment points in the towns you pass through. To best enjoy the experience, we recommend following the route in a clockwise direction.
Distance 38km
Difficulty Low